Acupuncture was originally part of traditional Eastern medicine, and has been practiced for thousands of years to cure many ailments. Doctors and missionaries brought acupuncture to Europe in the 17th century. It is now a common and widely accepted therapy.

In the Western Medical form of acupuncture, practitioners consider the physical and chemical effects the insertion of needles may have on ‘trigger’ points or acupoints. Trigger points are sensitive spots, often situated where nerves leave or enter muscles or tissues. Inserting a needle at these points stimulates the nervous system to release chemicals in the muscles, spinal cord, and brain. These chemicals will either change the experience of discomfort, or they will trigger the release of other chemicals and hormones which influence the body’s own internal regulating system. The resulting improvement in biochemical balance results in stimulation of the body’s innate healing abilities, and promotion of physical and emotional well-being. 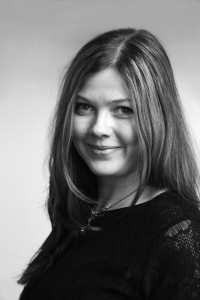 Karen is experienced in treating a range of patients – including office/desk-workers, pregnant women, the elderly, dancers, athletes, babies and children.

During the four years that Karen spent studying Osteopathy and Naturopathy, she worked as a Natural Remedies adviser, and practiced Lymphatic Drainage and Sports Massage.

Since qualifying as an Osteopath and Naturopath, she has completed further training in Medical Acupuncture (dry needling), Cranial Osteopathy (Sutherland Cranial College), and Applied Kinesiology (ICAK). For more information on these additional therapies please see www.karenwillis.net.

Karen originally trained as a Biochemist at the University of Edinburgh. During this period she became deeply interested in the field of complementary medicine. Following some years of research into cancer, genetic disorders and disease diagnostics, her interest in natural therapeutics led her to pursue a career in the healing sciences. 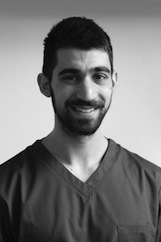 Pantelis qualified from the British School of Osteopathy with a Master’s degree in Osteopathy.

In addition to this, Pantelis has a Sports Massage diploma and is trained in Medical Acupuncture.

Pantelis has a sports background as he grew up playing football at a semi-professional level, and he thrives in the gym environment as he is able to work very closely with personal trainers. He also trained with British champions in the Escrima Philippino martial art system for four years.

His treatment utilises a structural approach involving massage, manipulation, mobilization, neuromuscular techniques, medical acupuncture and rehabilitation exercises. The treatment is tailored to each individual and is supported with advice on posture, lifestyle, nutrition and exercise. This clinical advice aims to help his patients understand the nature of their problems so that they can return to their everyday activities as soon as possible, and prevent further injury.

Pantelis treats many people suffering from work-related injuries. Occupational injuries can be caused by poor ergonomics, manual handling of heavy loads, misuse or failure of equipment, repetitive movements, and particularly, unsuitable posture. He can advise on correct posture and back care and also recommend preventative exercises.

The initial 45 minute consultation, which includes treatment costs £95 and subsequent 30 minute treatments are £65.

Clinic Central is located just off Upper Street in the heart of Islington, North London.

This is within easy reach of Angel, King’s Cross, Clerkenwell, The Barbican and The City, and within a couple of miles of Holloway, Camden, Kentish Town, Bloomsbury and Holborn. 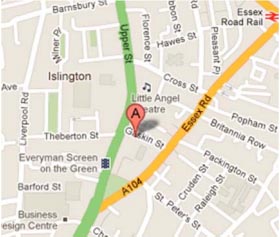 Pilates Central shares its building with a multi-disciplinary team of medical, biomechanical and complementary therapists, collectively known as Clinic Central.