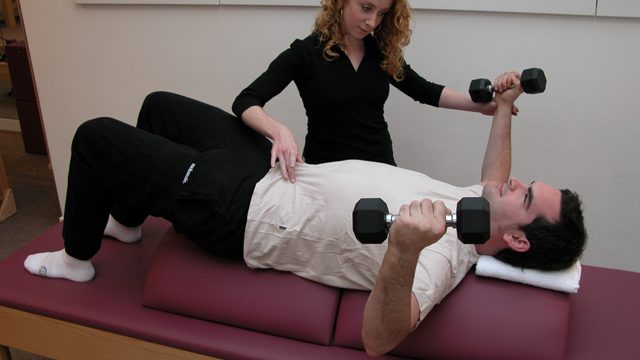 Many people think of Pilates as something mainly done by women. But around a third of our clients at Pilates Central are male and some days the studio contains as many men as women.

What is true, however, is that men and women often start doing Pilates for different reasons.

“Men tend to come for a specific reason – such as an injury – after being sent by their physiotherapist or doctor”, says Peter Ottevanger, Manager of Pilates Central. “So, they come to us to heal that injury and then come back when they are injured again – or else, get hooked and never leave. For women, it’s more likely to be a lifestyle choice.’

Increasingly, Pilates is appealing to all types of men – from dentists or taxi drivers with back problems, to film stars who need to look good and move well.

From James Bond to Hugh Grant

When preparing to play James Bond, actor Daniel Craig took up Pilates in earnest. Another fan is Hugh Grant, who quips, “Now I have muscles of steel and could easily deal with giving birth”.

Novelist Martin Amis says that Pilates “…keeps you flexible enough to pull on your socks as you get older… When I get out of the car now, I don’t go arrggghhh…”

Many rugby players use it, while rugby physios are now expected to have a grounding in Pilates. Nick Easter, the England number 8, is a devotee. “I’m getting on in rugby terms”, he says. “I’m aware the body can only take so much but I think I’m in a good place. Pilates has been a big help. It improves stability and gets everything in sync, which is important because when you’re fatigued your running technique disintegrates and you’re most vulnerable to injuries.”

Pilates teachers have their own routines for making male clients feel at home. Julian Littleford, owner of a Pilates studio in San Diego, says: ‘You have to open a man’s eyes to the depth and importance of the work and allow him to experience everything it can do”.

Littleford attracts males through scheduling them together and showing them how it will help with their sport. Initially there can be macho grunting but Littleford then suggests another approach of “…light resistance, correct form and attention to the breath… I try to convince a man who comes from the strict gym approach that there is another way of working and the results can be the same, but without the strain and pain.”

Give us a call for a no obligation chat about how you can benefit from a tailored programme of Pilates sessions in Islington N1.